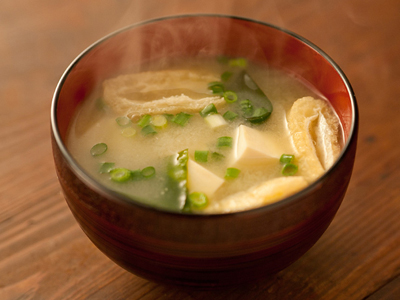 Few Japanese dishes are consumed more often or more consistently than miso soup. Made from a combination of miso paste (a traditional Japanese food made from fermented soy beans) and dashi broth, miso soup is served as a side dish with traditional Japanese-style breakfasts, lunches and dinners. The complex savoury flavours of the soup help to enhance the umami of the main dishes with which it is served. To give the miso soup a little more body, several complementary toppings are normally added to it, such as green onion, wakame seaweed, and firm tofu. 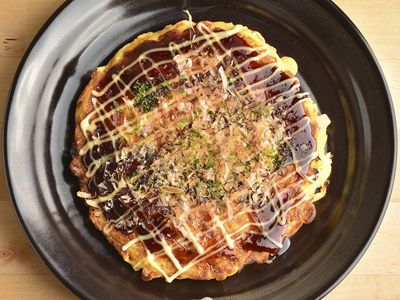 Okonomiyaki is made by mixing together batter, sliced cabbage, and other savoury ingredients; spooning the mixture onto a hot plate; and then pan-frying as you would a pancake. Okonomiyaki originated in Osaka and Hiroshima (where a different, ‘layered’ style of okonomiyaki exists) and its popularity spread to the rest of Japan, where specialised okonomiyaki restaurants are easy to come by. In some of these restaurants you are expected to prepare the okonomiyaki yourself, which makes for a delightfully fun cooking experience. 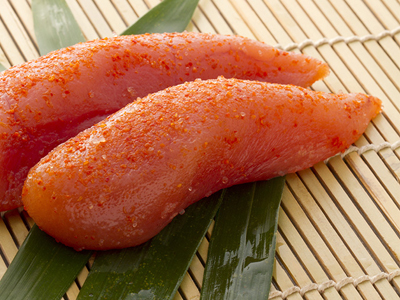 Lovers of salty seafood will reach the peak of their desires with mentaiko. This salty delicacy is made by marinating the roe (fish eggs) of pollock and cod in any of a number of salty, savoury, and spicy seasonings. The most basic mentaiko is marinated in a simple salt solution, while mentaiko marinated in spicy chilli pepper (known as ‘karashi mentaiko’) is becoming increasingly popular. Mentaiko is traditionally eaten as a side dish with steamed rice, as a topping on ramen, or as a filling in onigiri rice balls. In recent decades mentaiko has also been mixed with butter or cream to make a simple savoury or spicy mentaiko pasta sauce. 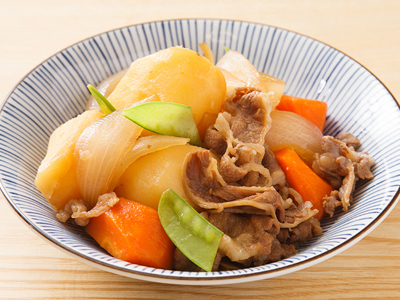 A flavoursome savoury dish of meat, potatoes and assorted vegetables simmered in soy sauce, sake, mirin and sugar, Nikujaga meat and potato stew is one of a collection of Japanese dishes called ‘nimono’ (meaning ‘simmered things’). Although nikujaga is available in plenty of Japanese restaurants, it is also considered a homely dish that differs in flavour from household to household. For an authentic Japanese nikujaga experience, therefore, the best thing to do is get invited to a Japanese friend’s house and put in a request with the family chef. 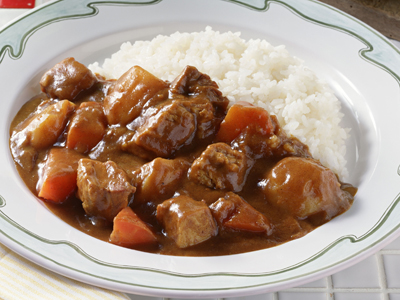 Known in Japanese as kare or kare raisu, Japanese curry is a yoshoku dish that was originally introduced to the Japanese by the British during the Meiji era (1868-1912).Japanese curry differs from the Indian varieties with which the UK is more familiar, in that it is generally sweeter in flavour, thicker in texture, and prepared more like a stew (with meat and vegetables being cooked by boiling in water together). Japanese curry is often prepared in Japanese homes with the help of curry roux; blocks of solidified Japanese curry paste that melt into the ‘stew’ and thicken up to become a flavoursome curry sauce.