A common dish particularly during the summer, samgyetang is a traditional soup made of chicken, garlic, rice, scallion, Korean jujube, Korean ginseng, and spices. It is known to have a high nutritional value. Not only is it known for its healthy contents but it also is popular simply for its creamy and meaty flavor. 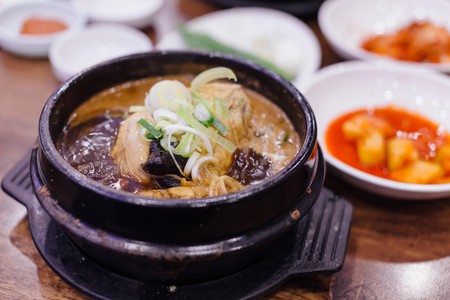 Soondae, or sometimes spelled as sundae, is a unique Korean dish made of pig’s intestines stuffed with several ingredients such as noodles, pork blood, and barley. Versions of soondae differ in fillings and wrappings, and are often prepared differently according to the province or city in South Korea. Nevertheless, though the recipes differ, every soondae is chewy on the outside and soft and flavorful on the side, creating an interesting mix of textures as well as flavors.

Naengmyeon is a common cold Korean noodle dish that consists of long, thin noodles, cucumbers, slices of Korean pear, slices of beef and a hard-boiled egg. The noodles are often made of buckwheat, potatoes, and sweet potatoes, but can also be made of arrowroot and kudzu, depending on the type of naengmyeon. It is a popular dish especially during the summer to cool off under the scorching heat and thick humid air in South Korea.

A sweet and grainy dish, hobakjuk is a traditional Korean porridge made from steamed pumpkin and glutinous rice that has been soaked in water. Though its appearance is simple, it is extraordinarily sweet and flavorful due to the pumpkin. It is a popular meal during breakfast hours, and is often a perfect meal choice for people who are unwell and unable to consume heavy meals. It is served both hot and cold but is best when hot.