In recent years South Korea has become better known for its technology than its food. However, thanks to delicacies like kimchi, which has become a global sensation, things are beginning to change. Here are is a list of South Korean foods you have to try.

Known as a sweeter version of the Western pancake, hoeddeok, or sometimes spelled as hotteok, is a popular Korean street food, especially during the winter season. It is essentially flat, circular dough that is filled with a mixture of cinnamon, honey, brown sugar, and small pieces of peanut and cooked on a griddle. The delicacy has crunchy exterior and soft interior as well as an irresistible flavor.

A juicy, savory dish of grilled marinated beef, bulgogi is one of the most popular Korean meat dishes throughout the world, and was ranked as the 23rd most delicious food in the world according to CNN Travel’s reader’s poll in 2011. It is often grilled with garlic and sliced onions to add flavor to the meat. The meat is usually wrapped in lettuce and it is also traditionally eaten with ssamjang (a thick, red spicy paste). 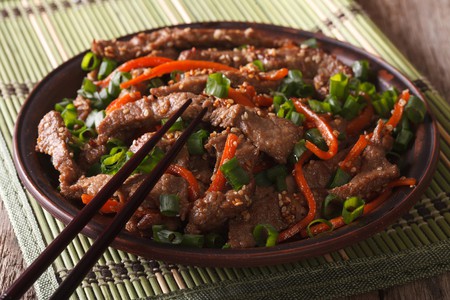 One of the most popular Korean dishes in South Korea, samgyeopsal consists of grilled slices of pork belly meat that are not marinated or seasoned. They are commonly dipped in seasoning made of salt and pepper mixed in sesame seed oil, and then wrapped in lettuce along with grilled slices of garlic, grilled slices of onion, shredded green onions, and kimchi. It is one of the most common dishes found in any Korean restaurant throughout the world.

Often served as a side dish during lunch or dinner, japchae is a traditional Korean noodle dish made up of stir-fried sweet potato, thinly shredded vegetables, beef, and a hint of soy sauce and sugar. Depending on the chef, additional ingredients like mushrooms are added to the mix. Japchae is known for its sweet and flavorful taste and its soft yet slightly chewy texture.